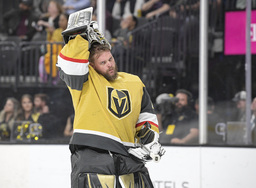 The 31-year-old Lehner, who will likely spend the entire 2022-23 season on long-term injured reserve, has three years remaining on a contract that carries a $5 million annual cap hit. The team said no timeline for his recovery has been determined yet.

He also also underwent shoulder surgery during the offseason.

During the Golden Knights' late-season run that left them out of the playoff picture for the first time since entering the league in 2017, Lehner disputed reports of both upper- and lower-body injuries during postgame media sessions.

In what turned out to be his final appearance last season on April 20, Lehner was pulled in favor of rookie Logan Thompson between the first and second periods of a 4-3 overtime victory over the Washington Capitals. It was a move then-coach Peter DeBoer said was made to spark the team and create a different vibe.

But with Vegas' playoff hopes hanging in the balance, reports surfaced April 22 that Lehner agreed to season-ending surgery due to an undisclosed lower-body injury suffered March 8 in Philadelphia.

After missing three consecutive practices leading up to a must-win game against the San Jose Sharks on April 24, Lehner served as a backup to Thompson in the game.

Less than two weeks before he was fired, DeBoer expressed regret about how he previously described Lehner's situation, saying he felt the 12-year veteran looked uncomfortable in net during a road trip in Canada.

With backup Laurent Brossoit's status also uncertain after undergoing hip surgery during the offseason, the Golden Knights are left with a potential goalie tandem of Thompson and journeyman Michael Hutchinson to start the season.