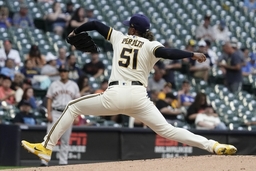 If the Milwaukee Brewers hope to muscle their way into the playoffs, they'll need players like Freddy Peralta to stay healthy and Hunter Renfroe to stay hot over the final 10 games.

Peralta is scheduled to start the series finale against the Cincinnati Reds on Sunday as the Brewers seek their first four-game sweep in Cincinnati since 2003.

The Brewers (82-70) entered play Sunday 1 1/2 games back of the third and final National League wild-card spot in the National League. They gained ground Saturday when they beat the Reds 10-2 behind two home runs and five RBIs from Hunter Renfroe.

The Brewers have scored 20 runs in the first three games of the series and have belted 43 home runs in 18 games against the Reds this season. They hope to continue that onslaught in the series finale and give Peralta some wiggle room.

Peralta (4-3, 3.45 ERA) last pitched on Sept. 8 as the starter in the second game of a doubleheader against the San Francisco Giants, but lasted just two innings before departing with fatigue in his throwing shoulder.

That was a major concern because Peralta had missed more than two months with a right shoulder strain before returning on Aug. 3,

Many thought he could be done for the season, but Brewers manager Craig Counsell paused those concerns when he announced on Friday night that Peralta would start the series finale, though his pitch count will be limited.

Peralta has posted a winning record in each of his first four seasons with Milwaukee and was named to the MLB All-Star Game last season as a replacement for teammate Brandon Woodruff .

The Reds (59-93) are planning to start rookie left-hander Nick Lodolo in the series finale.

Lodolo beat the Brewers on Sept. 9, allowing two runs and five hits in eight innings of an 8-2 victory. He struck out a season-high 11 and did not walk a batter.

That was a major improvement over his only other appearance against Milwaukee, when he surrendered three runs and four hits in 4 2/3 innings of a 7-5 win on Aug. 6.

Lodolo also came into Saturday tied for the MLB lead with 18 hit batters, but that's often a result of too much break in his curveball, Reds manager David Bell said.

"We've seen that a couple times, where it's breaking so much that he can't quite get a feel for where to start it out because it just sweeps so much," Bell said.. "That's led to some of the hit-by-pitches."

Lodolo said he's had more success with his breaking ball than failure.

"You're playing with a game of inches there," he said. "Go look at how many strikeouts I've had with balls a couple of inches from the back foot."