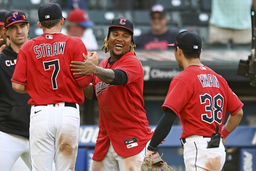 CLEVELAND (AP) Faced with their toughest challenge so far this season, the young Guardians needed to show they could handle themselves in a critical series.

The Twins were no match.

The Guardians followed up a sweep at Minnesota earlier this month by winning a series they had to have and opening a seven-game lead over the Twins, who have been ravaged by injuries down the stretch.

"Unfortunately, once you get to September some games just matter more," Quantrill said. "These last eight games against the Twins mattered more. We knew it, they knew it and I felt that we showed up and showed what we can do in big moments.

"The boys really took this challenge seriously and rose to the occasion."

Naylor homered in the first inning off Sonny Gray (8-5) and Rosario connected in the sixth off rookie Ronny Henriquez to make it 7-3 as the first-place Guardians opened a four-game division lead over Chicago.

Cleveland begins a three-game series in Chicago on Tuesday against the second-place White Sox, who were idle.

Nick Gordon homered off Quantrill (13-5) for the Twins, who came to town hoping to cut into the Guardians' lead but left further behind. Cleveland went 13-6 against Minnesota, winning nine of the last 10.

"We're not going to look at anyone except ourselves and be real about the way that we played," Twins manager Rocco Baldelli said. "There were just too many moments in the series that could have swung either way where they got the better of us."

Quantrill stuck around until the sixth and improved to 13-0 in 32 starts at Progressive Field. The right-hander is one win shy of matching Vic Raschi's record for dominance in one ballpark. Raschi went 14-0 at Comiskey Park from 1947-55.

"I don't know the exact numbers, but I do like pitching at home," Quantrill said. "I guess I don't want to jinx anything."

Sam Hentges got seven straight outs for his first professional save. The left-hander didn't know he was credited until he got to the clubhouse.

Gray left after two innings with tightness in his right hamstring. The right-hander had been pitching with soreness his last couple starts, but it got more severe and Baldelli decided to pull him.

"Sonny wasn't right and we could see that," Baldelli said. "He can't take himself out of the game, that's not the kind of player that he is."

Naylor put Gray in an early hole with his 18th homer, a no-doubt shot to right.

Rosario reached on a fielder's choice and Jose Ramirez singled before Naylor, who has done some of his best work late in games this season, guessed right and pounded Gray's 2-1 curveball 413 feet.

It was another big moment for Naylor, who has had a nice comeback after breaking a leg last year. Naylor also hit a double and let out a loud scream after snagging a line drive and stepping on first for a double play to end the sixth.

"He brings the energy every day," Quantrill. "Nails obviously went through a pretty tough injury last year and it's been awesome seeing him come back from that and really living up to what we all believed he could do.

"He's a good teammate and he plays with a lot of passion. It comes out however it comes out, but today was a great day for him. Got us off to a good start, and I think we're going to need that energy down the stretch here."

Minnesota's Luis Arraez went 1 for 3 and at .317 is one point ahead of Boston's Xander Bogaerts and New York's Aaron Judge, who is trying to become the first player to win the Triple Crown (homers, RBIs and average) since Detroit's Miguel Cabrera in 2012.

"How can you not?" Baldelli said when asked if he's pulling for Arraez. "You don't want to between Aaron Judge and anything in this world. ... My money is on Luis."

Twins: Minnesota has been overrun by injuries, and the club has been without some key players for extended periods. OF Byron Buxton has been out since Aug. 23 with a strained right hip. With the team fading from the postseason race, it's possible the Twins won't bring players back this season. "I'm not eager to have those discussions right now," said Baldelli.

Guardians: The team is hoping to have RHP Zach Plesac (broken right hand) pitch in a simulated game Tuesday for Triple-A Columbus. If the timing isn't right, Plesac may have to pitch in the Clippers' game at Toledo.

Guardians: RHP Aaron Civale (2-6, 5.40) will be activated to make his first start since Aug. 28 in the series opener against Chicago's Dylan Cease (14-7, 2.16). Civale had been out with elbow inflammation.